Until 2018, PSRG had run a single site repeater system, meaning that both the receiver and transmitter are located at the same location, in our case at the John Hayes Elementary School on top of Queen Anne Hill in Seattle. 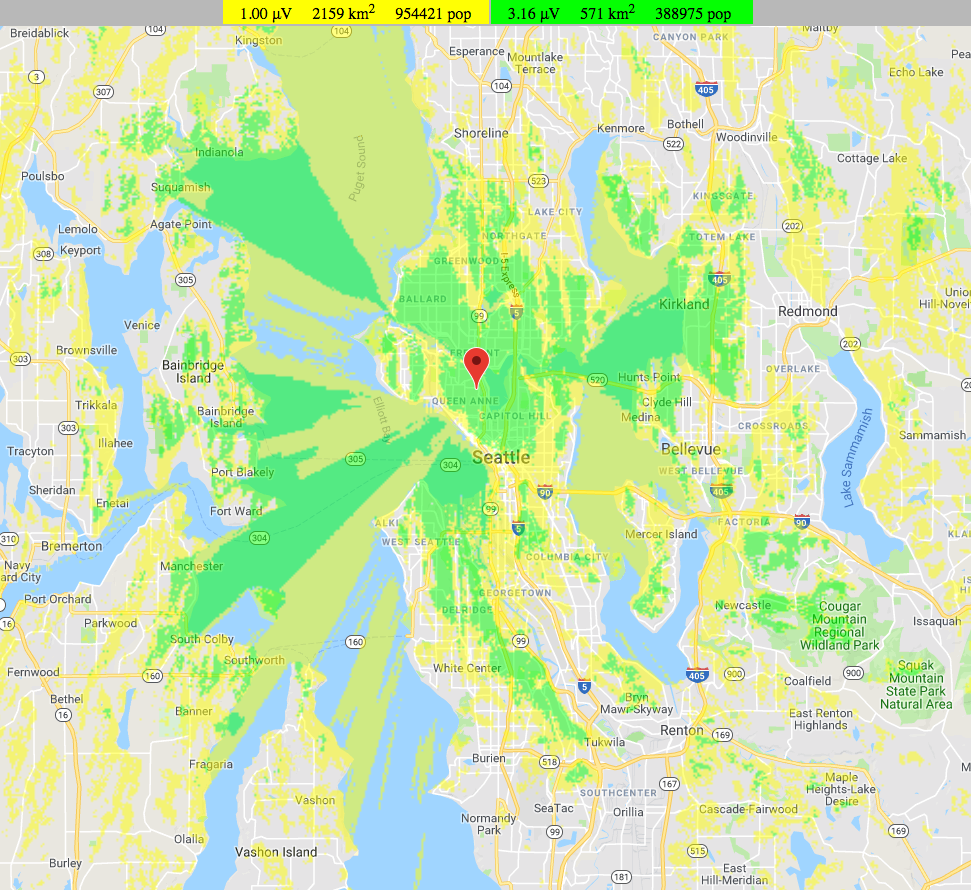 We started running a voting system as described in this document in late 2018, and on July 4th, 2019, we moved the primary repeater and therefore the transmitter to the Seattle Housing Authority Capitol Park Apartments on Capitol Hill, and removed our presence from the John Hayes school.  Queen Anne did amazingly well for a modestly located repeater, but Capitol Park has a height and height above average terrain advantage. The superior power system and access was another important factor. In addition, the group maintains a backup, single site repeater on Beacon Hill on top of the Seattle Housing Authority building there.  Beacon provides a good backup site, but the system does have holes in its coverage. In particular, coverage of the south end of Seattle is spotty from Capitol Park and it’s quite marginal around Seatac. There is also shading caused by our hilly terrain and areas like Madrona have problems because of this, and there are weak areas on the east side of Lake Washington.  The increasing use of low power handie-talkies causes an imbalance talk-in/talk-out of the repeater.

We have undertaken to improve the PSRG system by adding additional receivers, and a receiver voting system that will choose the receiver with the best incoming signal to forward on to the repeater transmitter.  The current local receiver will be just one of the receivers. We are currently running 6 receivers but we are not limited to that number. The primary transmitter is currently at Capitol Park and the backup transmitter will be at the Beacon Hill site. The Capitol Park and Beacon Hill receivers are both active, and voted.  In addition to these existing receivers, we have added an additional receivers and in North Seattle (Lake Forest Park), Cougar Mountain, Buck Mountain (recently added), and a receiver still in Shilshole (lower Sunset Hill, Ballard). Multiple receivers improve the ability for handheld and low power radios to reliably access the PSRG repeater, and will reduce noise on most signals from Seattle and area.  After a few weeks of operation on the new system, the benefits were already very evident. We observed several new-to-PSRG hams checking-in to the nine o’clock nets as a result of improved coverage. We continue to review the receivers and their performance and will consider installing new or relocating existing receivers as needs demand.

Voting controller – a small computer at the transmitter location which processes the signals from satellite receivers.

Analog receiver voting is not a new technology, but what is new is the use of Voice-Over-IP technology and an IP communications network (HamWAN) as the transmission medium between the remote receivers and the central site. This digital backbone simplifies the implementation of a receiver voting system, reducing the technical difficulty of audio level adjustment, and audio reproduction. 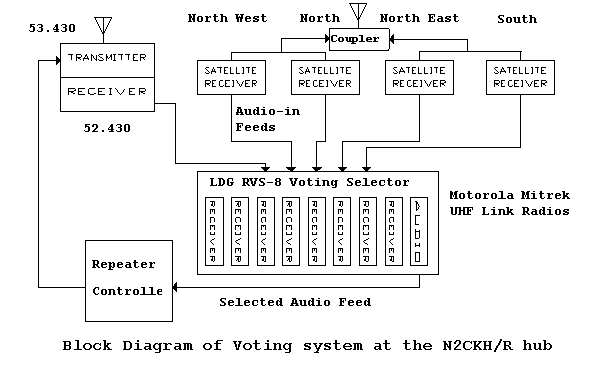 We are not using a traditional analog voting system.

The Allstar Voter System utilizes Voice-Over-IP technology, and in the Seattle area we are fortunate to have the HamWAN IP network which will serve as our linkage between remote receivers and the Queen Anne central site. In some cases we are also using the public Internet to support our satellite receivers, but prefer to use HamWAN which is independent of the Internet.

The Allstar system uses a small interface box called a Radio Thin Client Module (RTCM) which is attached to each receiver and transmitter in the system.  They are manufactured by Micro-Node International.  The RTCMs are connected back to the voting controller over an internet connection.

The connections to the RTCM include:

We have standardized on the Garmin 18x LVC GPS receiver.  This unit has the additional 1 PPS signal and is reasonably inexpensive.

The analog received audio from each active receiver is digitized, and batched in 20ms frames (packets) for transmission. The RTCM uses the attached GPS receiver to get a very accurate timing signal and then applies a timestamp to each frame.  The RTCM is also digitally measures the signal-to-noise ratio of its received signal and assigns a numeric signal strength metric to each frame (a number from 0-255). Each RTCM is sending a stream of timestamped audio packets with signal strength metric to the voting controller whenever there is an active input signal.

The voter controller is a raspberry Pi running Allstar linking repeater controller software, along with the voter software module enabled.  The job of the voter module is to receive the multiple streams of time stamped audio from each receiver, and then choose the frames with the best quality rating to pass on to the Allstar controller and then the transmitter.  Because an IP network is asynchronous, some packets may arrive at slightly different times which could introduce jitter in the audio. To avoid this the voter buffers and arranges the frames in time sequence order. A small delay (100ms or thereabouts) is added to the received signal before it’s sent to the transmitter to give the voter time to process the packets and deal with any internet introduced delays.  Every few frames, the voter reconsiders which stream is providing the best signal and may dynamically switch from one receiver to another as the receive signal quality changes. The high accuracy of the timestamps and the alignment of audio samples from different receivers prevents noticable changes in the audio as the voter switches between receivers.

More information on the Allstar implementation we are using: http://hamvoip.org

The Allstar voting system has good support for redundancy and failover.

The RTCM has a further fail-safe mode which is used if neither voting system controller is available. The RTCM fail-safes as a simple repeater controller, ensuring the repeater with local receiver remains operational. In this mode it has a morse code ID and no courtesy tone, but it will work as a single site repeater until internet connectivity to one of the two voters is restored.  We will configure the Queen Anne RTCM to operate in offline mode if it cannot contact either voter.

Finally, because the system is configured in software, it’s easy to reconfigure the active transmitter or alter other system configuration remotely.

There are a number of user visible changes from this transition.

This is the primary transmitter and receiver site.  Capitol Park is a 12 story Seattle Housing Authority building on Capitol Hill.  The repeater is an MTR-2000. It was formerly controlled by an analog Arcom Controller.  The combination of the RTCM and voter module and AllStar linking controller software (all running on a Raspberry Pi 3) now completely replace the Arcom controller and provide more control and more functionality.  The interface cable is purpose built to interface the MTR2000 to the RTCM and is provided by Northcomm Technologies Group.

Beacon Tower is a 16 story Seattle Housing Authority building on Beacon Hill and is our backup repeater site and the location of one of our satellite receivers.    This site uses a Kenwood TKR-750 repeater. Beacon Tower is also a HamWAN cell site with good connectivity to other HamWAN locations and direct connectivity to Capitol Park. We will also locate one of the voter systems here due to its close proximity to one of our transmitters and the good colocation with HamWAN.

Buck Mountain is on the Olympic Peninsula, above Dabot Bay.  Buck Mountain is a new HamWAN site and we connect directly to the HamWAN router there.  This site is directly connected to Capitol Park over a 5GHz HamWAN link. (Motorola CDM1250)

Cougar Mountain is just south of Lake Sammamish, east of Seattle.  This site currently uses a commercial internet link back to the voting system. (Motorola CDM750)

Lake Forest Park is a 48 foot tower at the Seattle Public Utilities reservoir north of Lake Washington and at a ground elevation of 500 feet AMSL.  The HamWAN connection at LFP connects to Capitol Park sector 1. (Motorola CDM750)

This site is located at the home of KD7DK, at the south end of Sunset Hill, in Ballard.  It provides some added coverage to the north Seattle shoreline. This site currently uses a commercial internet link back to the voting system.

This site is no longer in use.

The basic satellite receiver is based on a Motorola CDM750 or CDM1250 mobile radio with a preselector filter for improved selectivity and isolation from RF interference or de-sense.  The RTCM interfaces on the accessory connector on the rear of the radio. The transmitter is disabled on the radio. 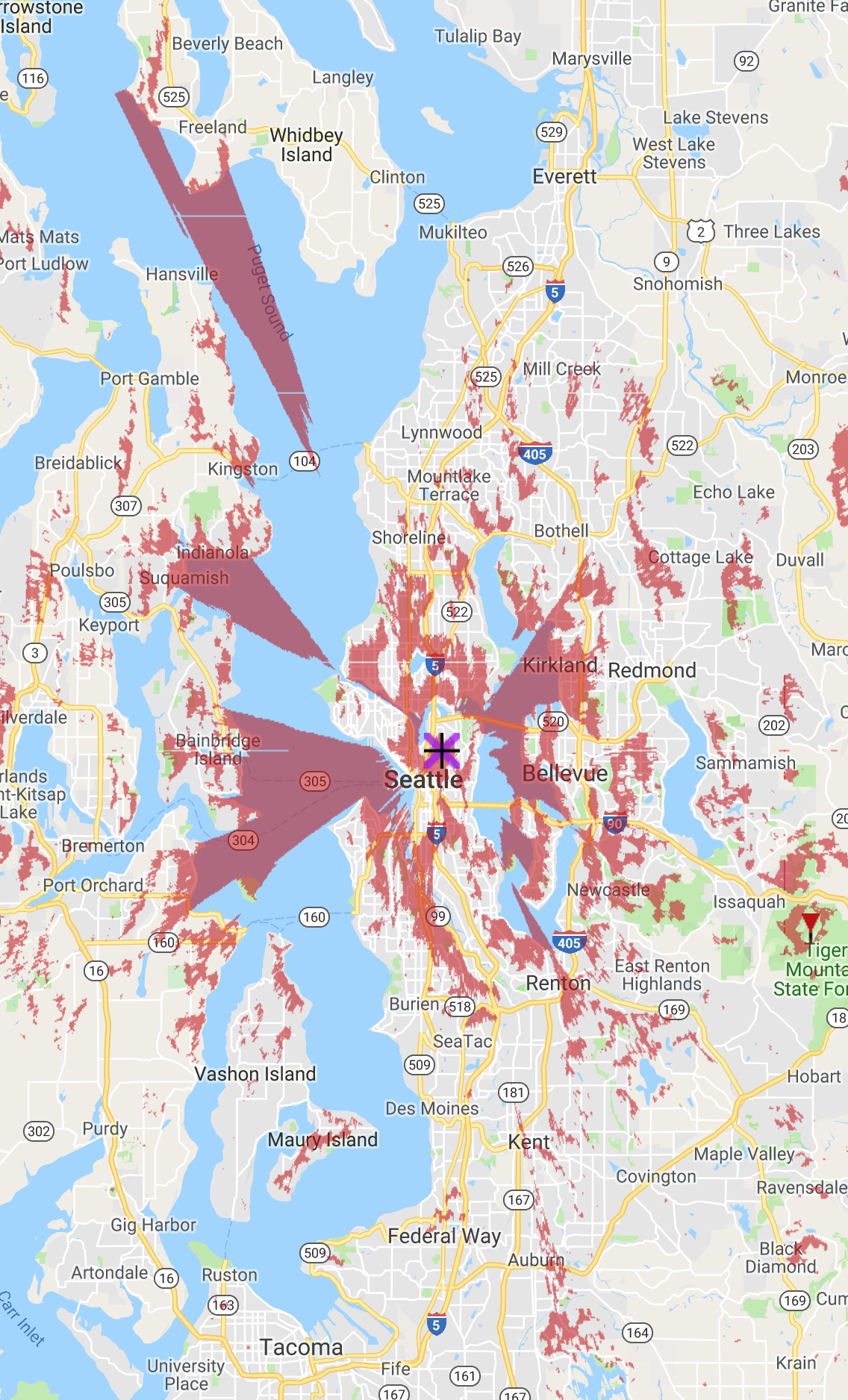 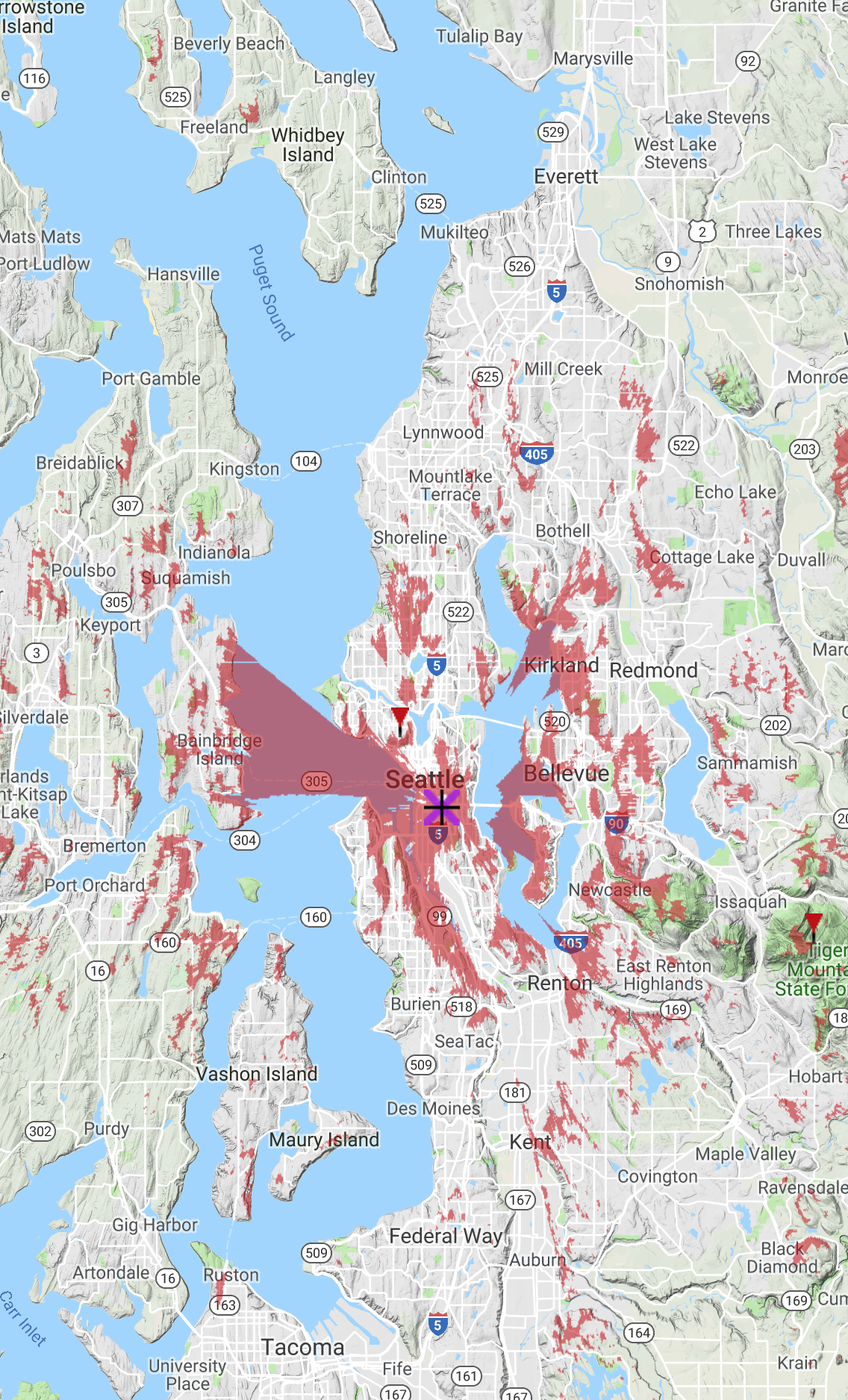 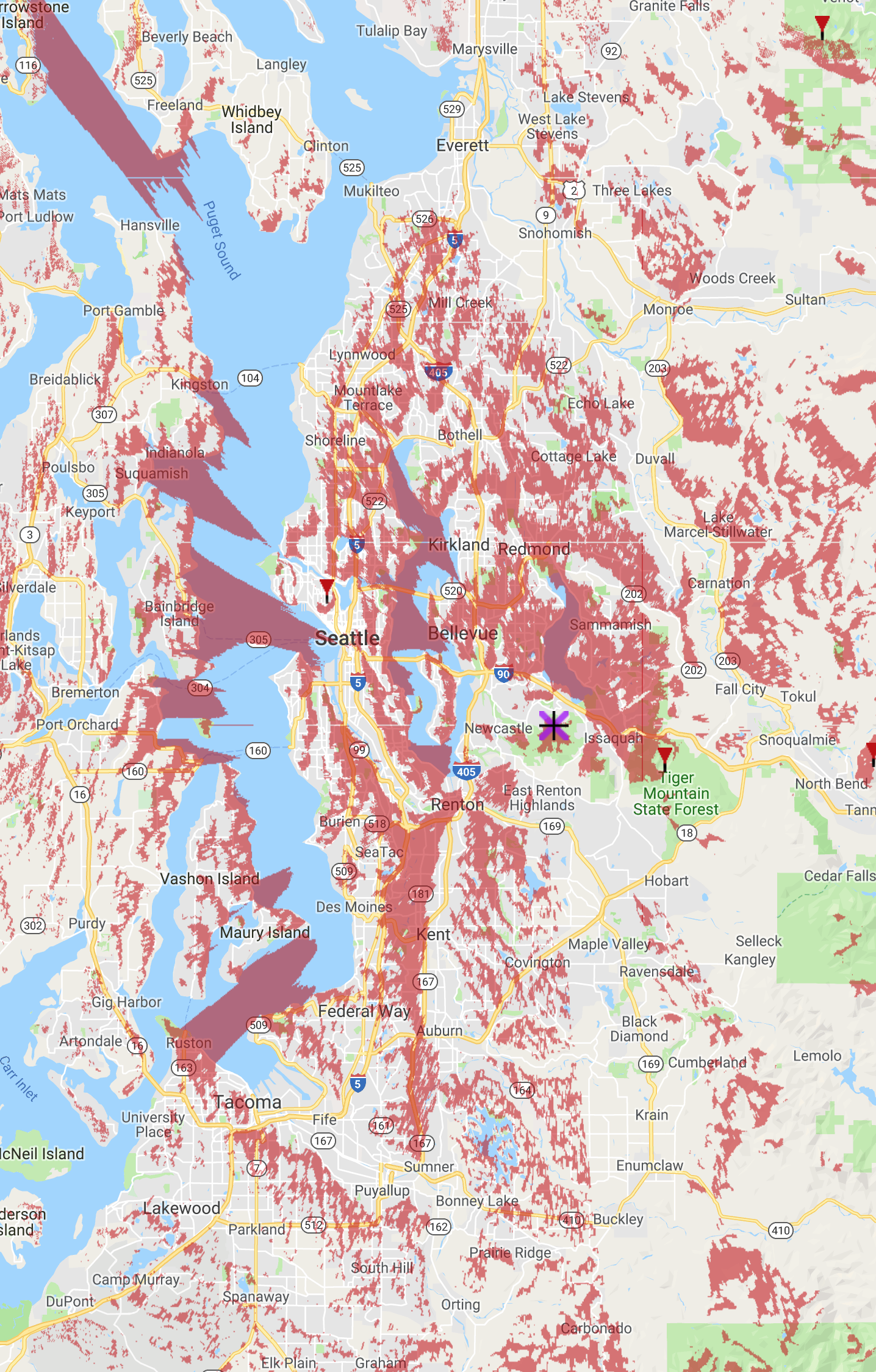 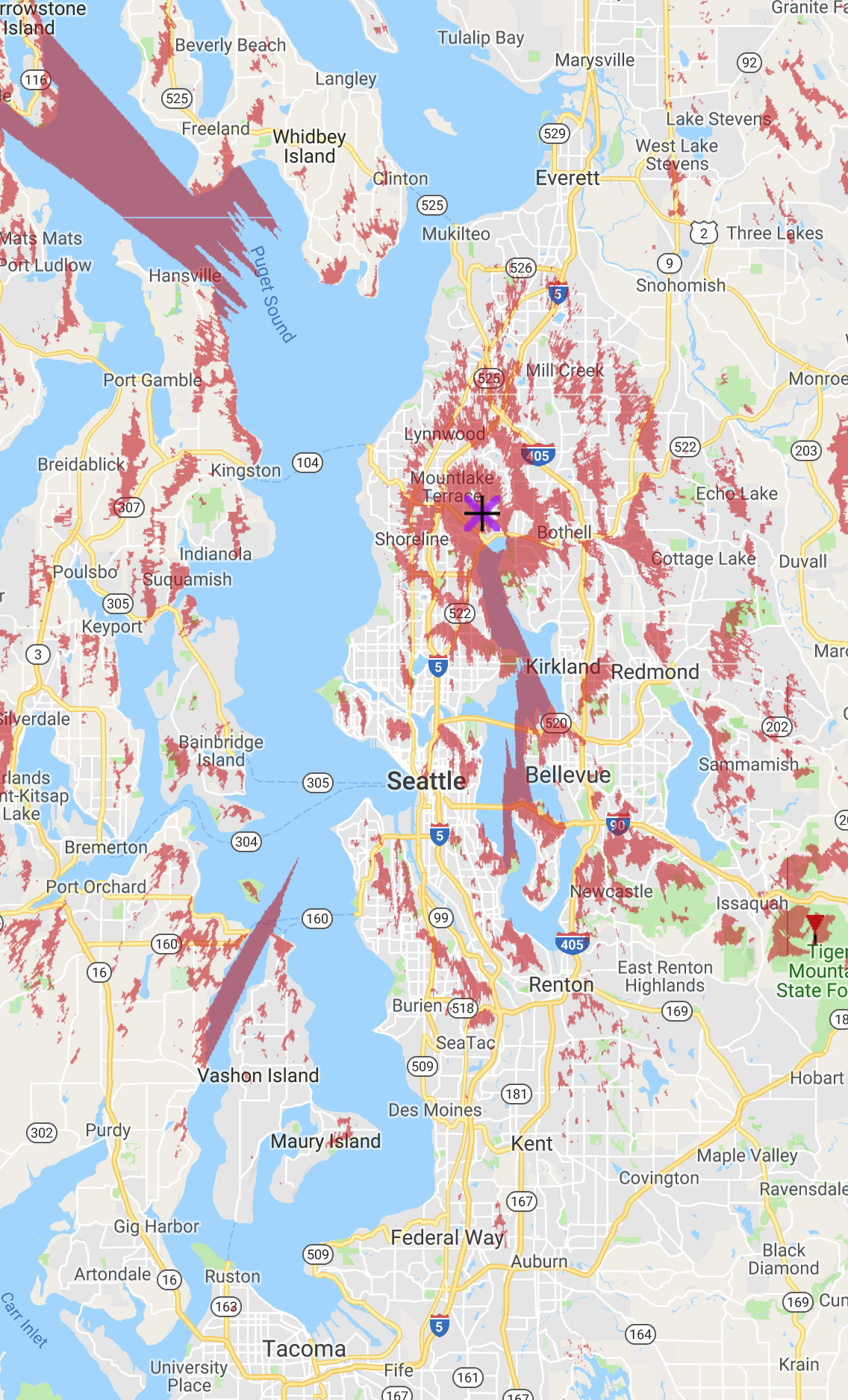 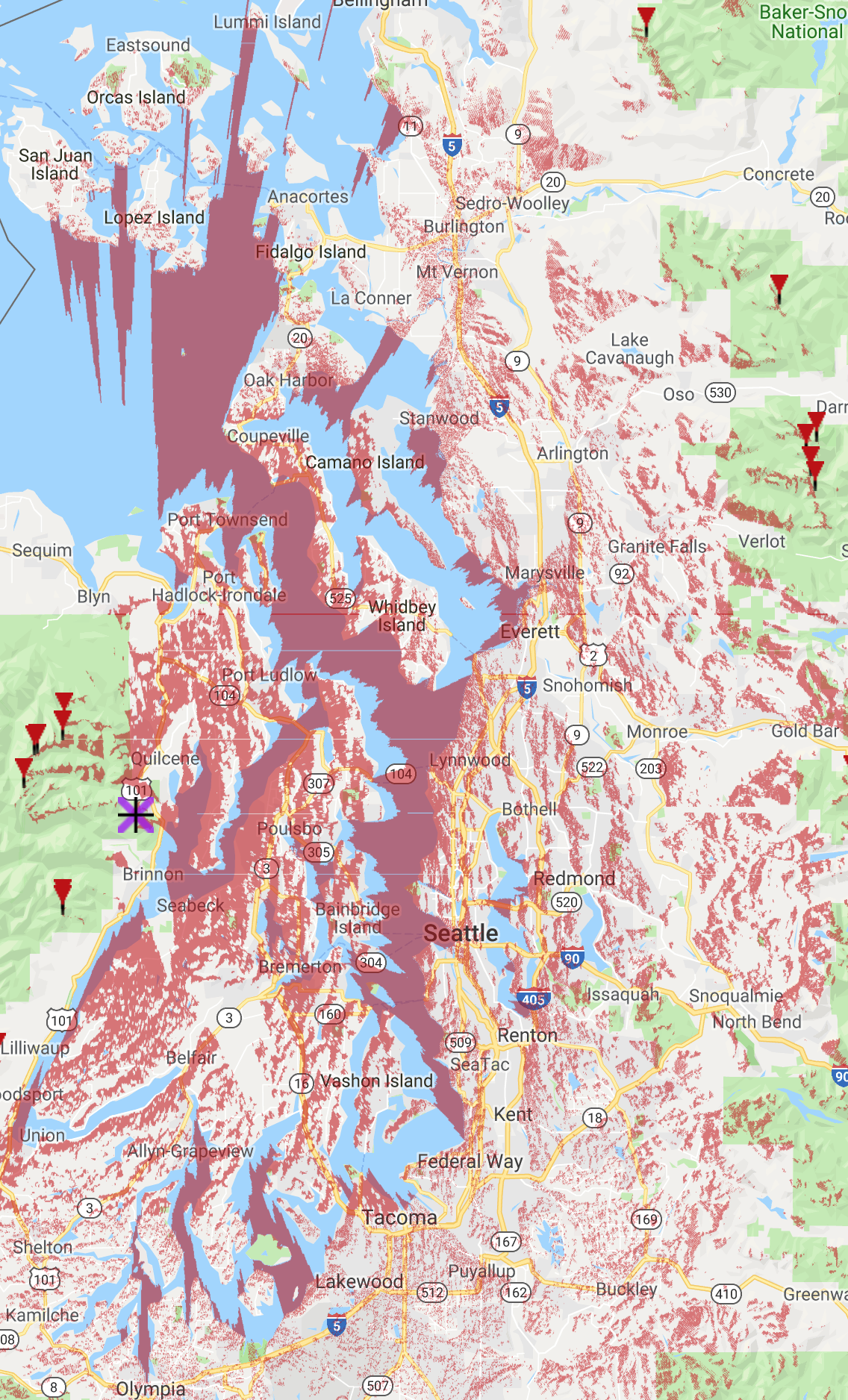 You can look at the strength of the signals being received by each of the receivers in real time at the PSRG Supermon page.